He was the inspiration for Tex, the palomino Quarter Horse in the Jared McKean private detective novels. Yes, believe it or not, this is a palomino! When he was younger, he was a brighter gold and his mane was like corn silk. This is him as a young lad of 34. Beautiful, isn’t he?

When I got Pete, he was 15 years old. He belonged to a riding school that named all their horses after characters in children’s books, and he’d been given the moniker Peter Pan–Pete for short. For a long time, I wanted to change it, but over time it became clear that “Pete” was really the perfect fit.

I was green and he was a seasoned lesson horse who had been around the block. He’d done trail riding, poles and barrels, and a little jumping. Before that, he was a cow horse, and before that, no one knows. But he was sweet and patient, the perfect horse for a timid rider like me, and he taught me a lot about life and about horsemanship. 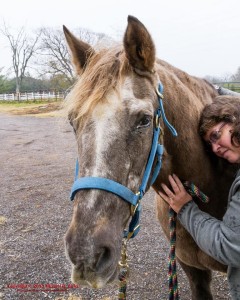 When I got Pete, he was 15 years old. He belonged to riding school that named all their horses after characters in children’s books, and he’d been given the monicker Peter Pan–Pete for short. For a long time, I wanted to change it, but over time it became clear that “Pete” was really the perfect fit.

When I quit teaching, I gave him to my friends Robert and Gay, with the stipulation that if they ever needed to get rid of him, they’d give him back to me. The year he turned 30, they moved to a less rural area, and Pete came back to me, along with his pasture mate, Loki, a crippled Friesian/Walking Horse (we think) cross.

Pete turned 36 in May of 2016, which is a venerable age for a horse. (The average lifespan for a Quarter Horse is 25.) This is what I wrote about him then: He doesn’t see or hear as well as he used to, and he moves a little more slowly these days, but he still enjoys his special foods, treats, and massages. I showed him an article about Shayne, an Irish Draught who lived to be 51 and another about the oldest documented horse: “Old Billy,” a horse in Woolston, Lancashire, who died in 1822 at the age of 62. I hope he gives them a run for their money.

It didn’t happen that way. We lost him in August. He went as gently as he could have, in his own time, without pain or fear. I was petting him when he passed, and that night, I dreamed about a palomino foal frolicking in a lush green pasture. I think it was his way of letting me know he was all right.

I miss him every day.

Because some of you have asked, I’ll be sharing some Pete stories in the coming weeks and months. I’ll also keep you posted about Loki, the pasture mate I mentioned earlier. In the meantime, I’d love to hear about your horses (or your dream horses) in the comments.