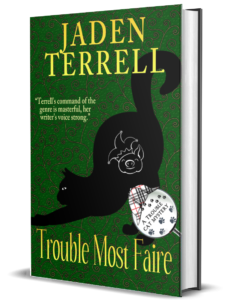 After the worst breakup in human history, Robbi Bryan needs a carefree summer and a place to fly her falcon. To give her wounded heart time to recover, she joins the Sherwood Renaissance Faire. But the faire holds much more than jugglers, archers, and a chance to reenact the days of yore. Robbi finds herself entangled in a web of secrets, lies, rivalries, and murder. The last thing she has time for is a handsome Scotsman with some hefty baggage of his own.

Mal McClaren has found a haven and a retreat among the permanent residents of Sherwood, Tennessee’s year-round Ren Faire. When a murder threatens his home, the brawny Scotsman comes up with a risky plan to find the killer and save the faire. He didn’t count on falling for a feisty falconer with a troubled past.

Trouble, the famous black cat detective, has never lost a human in his charge. He’s also never had—or wanted—a sidekick. But with a killer on the loose and the future of the faire in jeopardy, Trouble must work paw-in-hoof with Tuck, an incorrigible potbellied pig, to unmask the killer and show two wounded people that love is a risk worth taking.

“For those who enjoy a fast-paced, precisely plotted murder mystery as intense & stimulating as a mug of aged mead, TROUBLE MOST FAIRE will more than satisfy. Jaden Terrell’s established & growing reputation as a master of this genre is as sharp, shiny, & chillingly effective as the foul play–and the sword play–that is artfully woven throughout this most excellent & thoroughly entertaining tale.” – Mallard’s Cottage
Read More of this Review